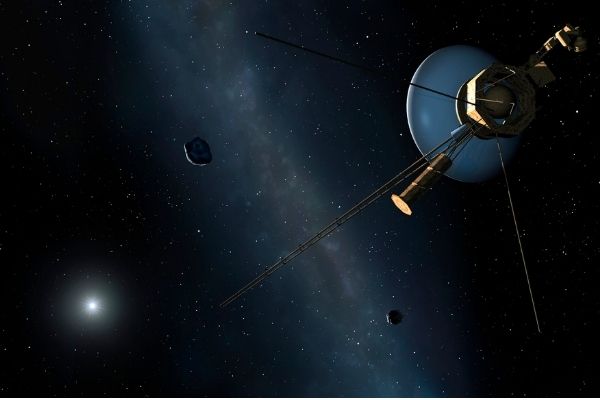 While isolated at home (what’s new?) waiting for my COVID test results, I was reminded of that old Instagram photo about our visit to the National Air and Space Museum in Washington DC, in 2016. So it gave me time to post a new blog update. 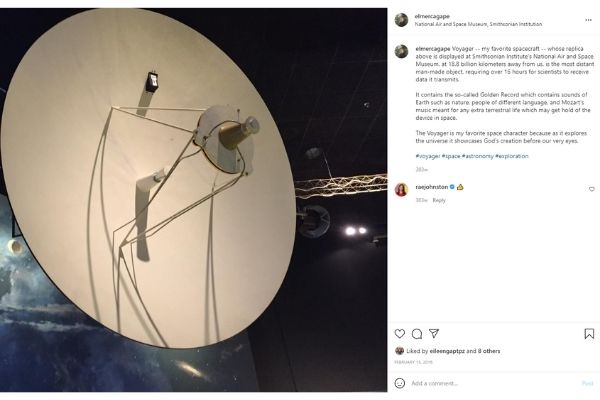 [The] Voyager is my favorite space character because as it explores the universe it showcases God’s creation before our very eyes. – EC

If you are a space geek like I am, maybe you are also blown away by the sheer magnitude of the vastness of space. If not, think bigger. Much, much bigger and prepare to be blown away.

It’s the stupendousness of the size of the universe whose distance between celestial bodies is measured in light-years (1 light year = 9.5 trillion kilometers) instead of kilometers or miles. Speaking of distances, there are twin space probes that have traveled the farthest among man-made objects: the Voyager 1 and Voyager 2.

As of late November 2021, Voyager 1 is 155.5 AU (astronomical units) or 23.2 billion kilometers or 14.4 billion miles from Earth. An astronomical unit is a distance between the sun and Earth which is also equivalent to 150 million kilometers (93 million miles). Furthermore, since light travels at 299,792,458 meters per second or 186,000 miles per second, it takes 8 minutes and 17 seconds for photos of light to travel from the sun to Earth. In other words, 1 AU is equal to a little over 8 light minutes.

From a perspective, our closest star Proxima Centauri is 4.246 light-years away. That’s 4.246 x 9.5 trillion kilometers away. Icarus, on the other hand, is the farthest star detected by Hubble Telescope. Since it took 9 billion years for its light to reach the Earth, Icarus has likely collapsed into a black hole or a neutron star billions of years ago; the typical lifespan of blue supergiants like Icarus is just around 10 million years. To the typical human way of thinking,  that’s a long time. But stars can live for billions of years, that’s just a speck in the grander scheme of things.

Back to the main heroes of this post, here are some of the amazing facts y’all need to know about the Voyager space probes.

As stated above, the distance of Voyager 1 from Earth is too far that it takes a signal almost a day to reach the home base. In other words, it’s nearly one light-day away. Yet, that’s nothing compared to the distance between celestial objects. For example, Andromeda, the closest galaxy to our Milky Way, is approximately 2.5 million light-years away. For a machine built in 1977 and overextending its use from its original purpose, the Voyager probes have been remarkable, to say the least.

A zoom out of the sharpest view of the Andromeda Galaxy ever, showing more than 100 million stars!

On December 10, 2018, Voyager 2 joined Voyager 1 as the only objects man created to travel in between stars, one of which is our very own Sun. Both space probes have now exited the heliosphere represented by the protective bubble of particles and magnetic influence created by the Sun, also known as the heliopause. As such, it was discovered that interstellar space isn’t as empty as a vacuum; Voyager detected a faint, monotonous hum of interstellar gas (plasma).

Listen to the sound of interstellar gas.

I captured these haunting interstellar plasma sounds in 2013. Recent data show the density around me has increased and I’ve measured a long-lasting series of these plasma waves, providing more insight into the structure of interstellar space. https://t.co/ZVyS4CwkI9 pic.twitter.com/KEslJiThNa

It always helps to see a perspective when talking about speed, distance, and other metrics. At 62,140 km per hour, the Voyager spacecraft is one of the fastest man-made objects ever built. At 17.2 km per second, it’s much faster than the speed of sound (0.34 km/sec), bullet (0.76 km/sec). Using another perspective familiar to many of us, using the same speed as Voyager 1, it will take 25 seconds to reach from London to Paris.

Voyager 1 and 2 were designed and launched in 1977 on a rare occasion when the outer planets named above were on a rare alignment. By doing so, a spacecraft visiting one planet could use gravitational assist to fly to the next one and save fuel as it allows a spacecraft on a particular flight path to swing from one planet to the next without the need for large onboard propulsion systems.

This gravity assist maneuver uses the gravitational strength of a planet to push a spacecraft towards its intended destination. This method was already demonstrated with NASA’s Mariner 10 Venus/Mercury mission in 1973-74. It would even be more helpful for probes aimed at exploring the outer planets located farther away.

This approach will only be more favorable with a specific alignment of planets which would occur in the next few years after that 1977 launch. Using this method helped significantly decrease the time to reach outer planets. For example, it reduced flight time for Voyager to reach Neptune from 30 years to “just” 12 years.

If the Voyager mission were not launched that year, we had to wait until the year 2152 when the next favorable alignment will take place to leverage the power of gravity assist.

The Voyager program was designed as a backup to an original Grand Tour plan.

Back from the heels of the successful Apollo mission that sent a man on the Moon in 1969, the Voyager mission was planned as a continuation to the Mariner mission which made interplanetary probes to explore the inner planets of the Solar System in the 1960s and early 1970s.

It had previously made flybys to Mercury, Venus, and Mars, and made a return to the latter two planets, gathering valuable information along the way.

NASA then had set its sights towards the more ambitious but much more expensive exploration of the outer planets, mainly Jupiter and Saturn, along with their moons. Although possible, NASA encountered budget constraints and had to choose an alternative to make it work.

The plan was to send both probes to extensively study Jupiter and its moon Io, and Saturn and its moon Titan. Voyager 1’s trajectory was designed for its flyby towards Titan and Saturn’s outer rings, before diverting away from the plane in which most planets orbit around the Sun. Meanwhile, Voyager 2 was subjected to gravity assistance from Saturn to boost its velocity towards the direction of Uranus.

Due to its pioneer flyby missions, Voyager relayed additional knowledge of Gas Giants back to Earth. It discovered that Jupiter also had a thin ring around it, and two more Jovial moons named Thebe and Metis.

Even though it was launched at Cape Canaveral a few weeks later than Voyager 2, Voyager 1 was the first man-made spacecraft to cross the heliosphere and is now navigating outside the influence of the solar wind, deep into interstellar space.

Voyager 1 may have the bragging rights as the farthest man-made object to date, but Voyager 2 was the only spacecraft to study all four of the Gas Giants at close range. Along the way, it discovered Jupiter’s moon Adrastea, the first natural satellite discovered from images taken by an interplanetary probe rather than through a telescope. Voyager 2 was also the first human-made object to fly past Uranus (1986) and fly by Neptune (1989). In Uranus, Voyager 2 discovered 10 new moons. In Neptune, the spacecraft also discovered the Great Dark Spot, long after the same feature in Jupiter called Great Red Spot was discovered by Robert Hooke in 1664. 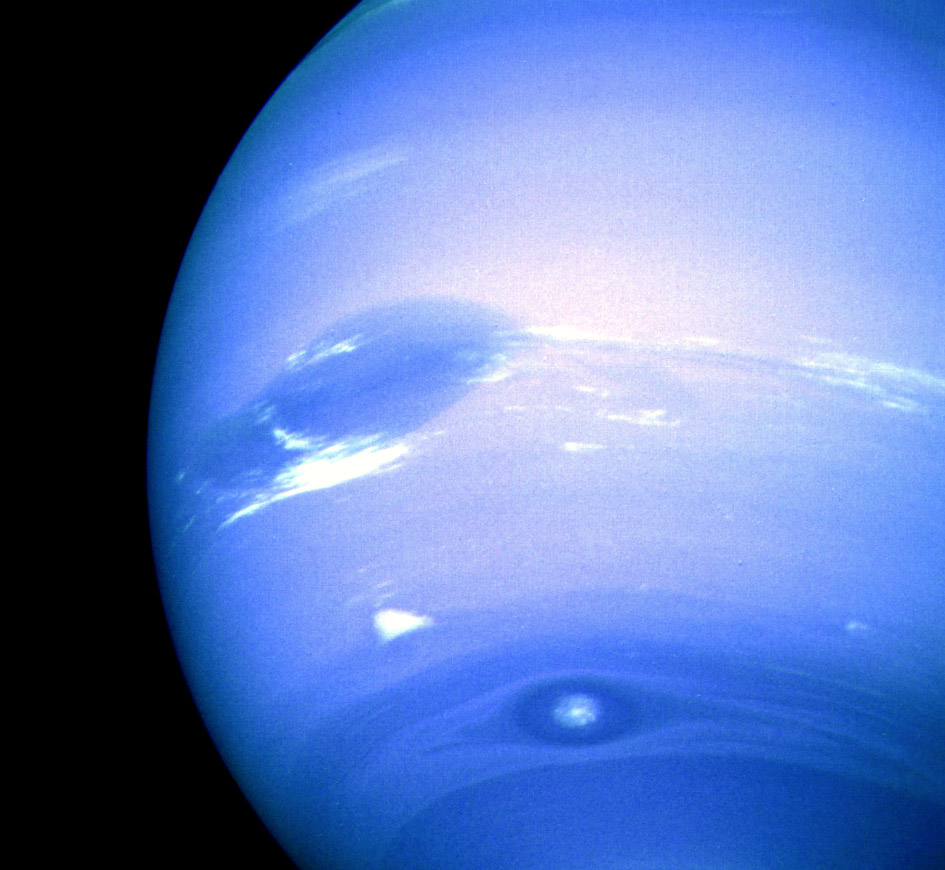 The probes only had 69.63 kilobytes of memory

The Voyager mission was launched at a time when computers were relatively confined to large educational, scientific, and military establishments. At 69kb, memory storage is just enough to hold a small jpeg image file. It has a computing speed of about 81,000 instructions per second. Sounds reasonable, isn’t it? In comparison, phone storage now has around 64GB of memory storage capacity and has a processing speed of 3.36 billion instructions per second. During the 70s such minute storage capacity isn’t packed in a tiny compartment as what we have now. Scientific data is encoded on old-fashioned digital 8-track tape machines rather than whatever solid-state drive our high-end laptops currently use.

Once data is transmitted to Earth, the Voyager spacecraft has to overwrite data to make room for new observation data.

Voyager 1 has a 22.4-Watt transmitter — about the same capacity as a small light bulb

At one light day distance, Voyager probes send out signals using its 22.4-watt transmitter power back to Earth receivers. By the time the signals reach their destination, they are reduced to just roughly 0.1 billion-billionth of a watt (10 to the power of -16). No wonder NASA deploys its largest and most sensitive antennas under its Deep Space Network to hear the faint signal Voyager sends.

These facilities are located 120 degrees apart: near Barstow, California, near Madrid, Spain, and near Canberra, Australia.

As Voyager 1 was about to make an exit from the ecliptic plane on which the Earth and other planets of the Solar System tend to orbit around, it took a photo of the Earth for the last time. From a distance of 6 billion kilometers, the Earth appears as a bluish-white speck in the following photo I hope you can observe just within the bright band of rays reflecting the Voyager spacecraft.

The photo was taken on Valentine’s Day 1990, less than 13 years since Voyager 1’s launch. Carl Sagan, a noted author, and astronomer acknowledged the idea that it won’t support much scientific value as the Earth would be too small for Voyager’s cameras to provide any detail — we already have those details captured much closer. But the photograph would be more meaningful from a perspective of humanity and its place in space. 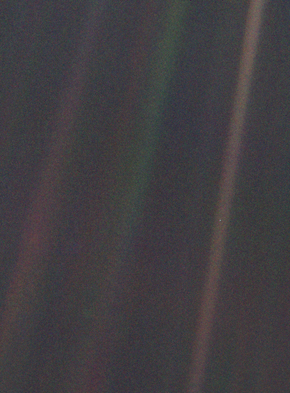 “The spacecraft will be encountered and the record played only if there are advanced spacefaring civilizations in interstellar space.”- Carl Sagan

Not only scientific instruments and probes were part of the Voyager probes. A collection of selected sounds and images to portray the life and culture of the Earth were also part of the mission. They are intended for any intelligent extraterrestrial life form who might detect and find them in the Voyager spacecraft.

Carl Sagan and his colleagues at Cornell University assembled 115 images of people like a woman in a store, and a page from Isaac Newton’s book. It also has a variety of natural sounds made by nature and animals and voices from Earthlings in 55 languages. Music from Bach, Mozart, and other diverse musicians and recordings from Radio Moscow were represented in the record.

In 40,000 years, Voyager 1 will pass within 1.6 light years’ distance from the star Gliese 445 which might increase its likelihood of discovery by other intelligent entities who can hopefully understand the primitive instructions embedded within the golden record. 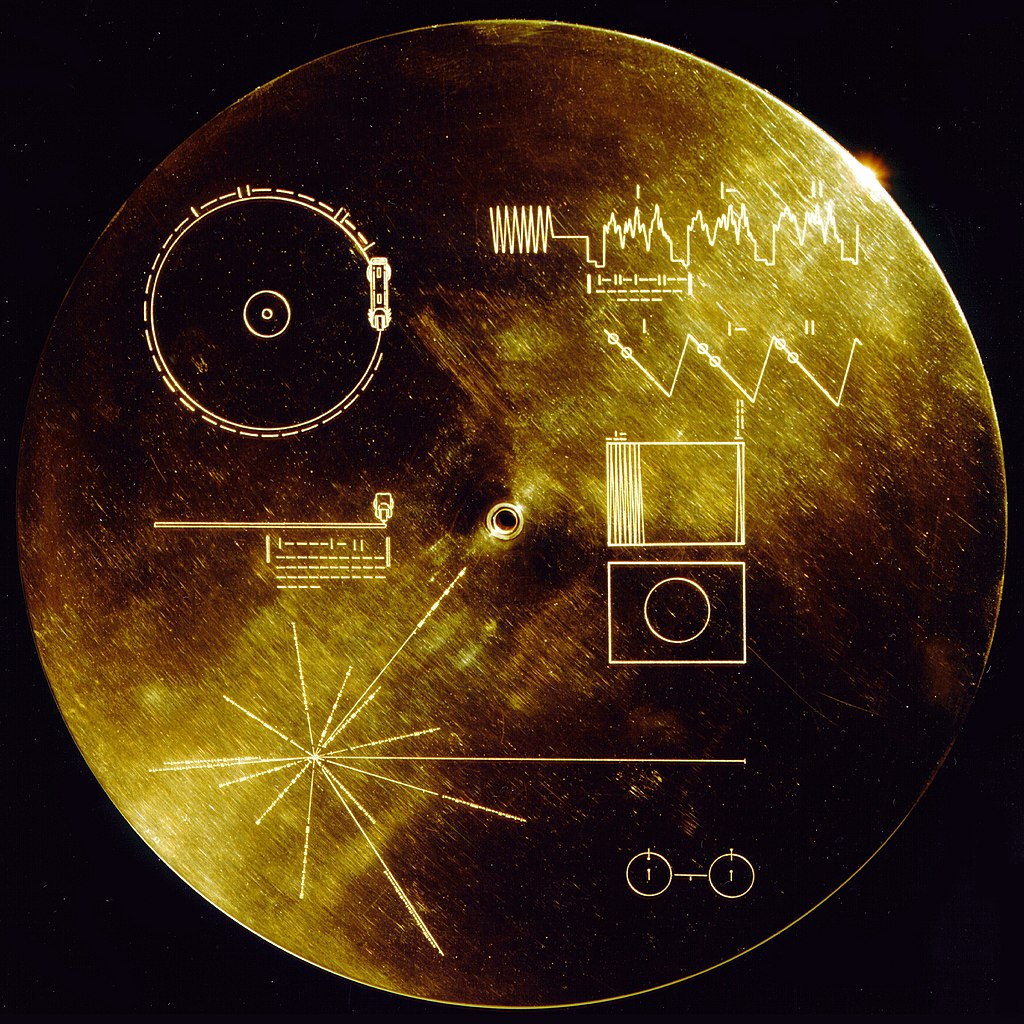 As I captioned in my Instagram photo, [The] Voyager is my favorite space character because as it explores the universe it showcases God’s creation before our very eyes.

The Joy Audiobooks and Podcasts Bring

The moment the Sony Walkman was introduced to the mass market, it changed the...
Read more

I have been writing for Asian Correspondent as a blogger for the past 18...
Read more

One of the first things I searched for, upon arriving in Hong Kong, is...
Read more
Education