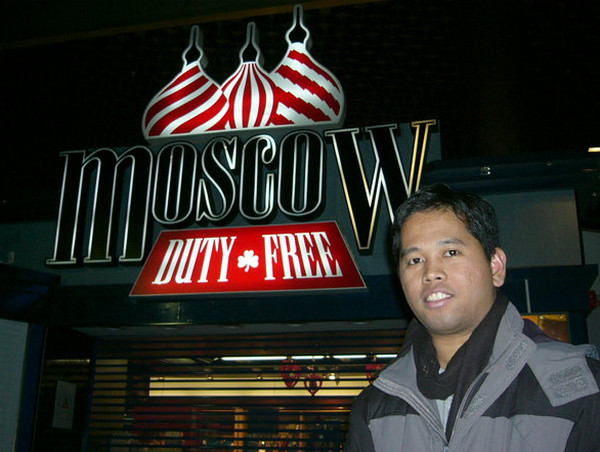 I’ve always wished to travel to Russia. One of the intriguing reasons to pay a visit is my fascination with the largest country in the world even during the height of Cold War. I used to read books on geography and marvel at the great Soviet landscape, but even more intrigued by its people. I followed historic events like Gagarin and Laika’s space milestones and controversies and highlights such as the 1972 basketball game between Soviet Union and USA and the vindictive Miracle on Ice in 1980 Moscow Olympics.

My interest was rekindled when in 2006, I made my first trip to Europe. I was excited yet nervous in my first attempt to get a Schengen visa. Girlie Presto, a college friend based in Austria was instrumental in making the trip happen. She found time to assist in preparing documents to ensure I get the desired entry pass to this culturally rich continent. I booked my Aeroflot flight for Vienna via Moscow. As you know, Aeroflot is Russia’s flag carrier and as such, it is customary to make stopovers at airline hubs. Now this is my chance to set foot in Russia, even as a transit passenger.

Before my trip to Austria, I had strange feelings not on the destination but in the brief stopover. For those not familiar with Russian mindset, it can be intimidating. And I am one of those who harbor the feeling. I started to learn Russian phrases.

February 2006, I stepped into Aeroflot and took off in the middle of the day. In the cabin, passengers were a mixed bunch of Chinese, Middle Eastern and Caucasians I presumed to be Russians. Since this was my first long haul flight, it felt uncomfortable longer than my earlier flights. The previous longest one was in October 2005, when I  visited former flatmate Jun Angulo in Tokyo. That duration of flight was just about ideal to sit down in the economy class without starting to feel uneasy and bored. At least the cabin attendants at Aeroflot were nice and accommodating, occasionally asking if passengers need extra blanket or a cup of tea. While staring at the on-board flight tracking system, I asked one middle aged stewardess if we were in the vicinity of the Volga region.

“Are we now passing by Samara?,” with my finger pointing downwards. In halting English, the lady managed a wry smile and gestured otherwise, as if to say “what the hell is this person talking about.”

About nine and half hours later, I was in Moscow’s old Sheremetyevo Airport experiencing the longest daylight hours ever. As I later learned, the outdoor temperatures were in minus 20s as I keenly observe people starting to put on their thick fur jackets while preparing to disembark. The runway was filled with snow and I wonder if it was hazardous for flights at such conditions.

The airport was dark, with dimly lit interiors and limited seats available for transit passengers among the first things I noticed. But to feel that way was better than preoccupied with thoughts about getting questioned by transit official who insist on speaking the local language. I had about an hour or so to wait for the shorter onward flight so once I figured out my assigned terminal number (after another round of screening by airport staff) I walked around a plethora of fellow transit passengers: Japanese tourists taking a much-needed toothbrush break before flying to Cairo, a young child asleep at the lap of his mother, and a talkative Indian fellow whom I befriended. I found out that the half-open dining places weren’t worth the visit.

“Where are you going?” he asked. “I am going to Vienna to visit a friend,” I replied.

“I find it unusual for someone like you to take vacation on your own,” sounding skeptical. “What about you,” I retorted.

“I am on my way to Yerevan to take up medicine,” he answered. “Oh, Armenia.. I find it unusual for an Indian guy whose country has a plenty of nice universities to go somewhere that’s not well-known for medical education.” At least I am not aware.

When it was time to board the smaller aircraft, people started to form a short line. Yet I felt a bit discriminated that while folks have smoothly got into the cabin, I was stopped for another round of review of my Schengen qualifications. The airline officer stared at me for two seconds and gestured for me to move along as he handed me back my passport.

Thanks Sheremetyevo airport. It may not be very memorable, but nonetheless I managed to fulfill that wish to land in Russia.

"Love the giver more than the gift" - Brigham Young Gifts are among the most...
Read more

Towards the end of the year, around Thanksgiving and Black Friday deals that send...
Read more

Home is where the heart is. Home sweet home. There is no place like...
Read more
Travel