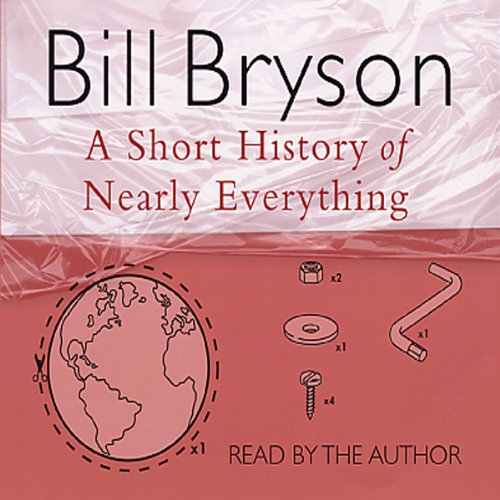 On my 27th birthday, I received an unusual gift from my former boss, Colin Bates. It was a rather huge, hardbound book with a pink cover, entitled “A Short History of Nearly Everything.”

Prior to that, I had a short attention span when it comes to reading thick books with no visual aids. I prefer to scan pages of Time, Reader’s Digest, and National Geographic, magazines that are rich with visual media — pictures, infographics, and charts that break the textual monotony littered with foreign vocabulary that blurs my imagination. In most cases, I am too lazy to bring out that brown pocket dictionary to find out what a new term I encounter, just to keep up with the narrative.

By the time I brought the bulky book home, I couldn’t put it down. The moment I immersed myself into his narrative, I found it easy to understand an otherwise complex and convoluted world of, you guessed it, everything. Bill makes it seamless to tell a story and facts about both the size of the universe and subatomic particles in, mind you, layman’s terms. He often uses perspectives to relate his story which adds entertainment into learning.

Like one inquisitive kid trying to answer questions that intrigued him, Bryson has connected with the field experts — from archaeologists to zoologists. His findings are summarised in this book, transforming uber-technical, jargon-littered pieces of research into one that is as informative as it is educational. Reading science books may be a necessary burden to many young learners. But if these pieces of scientific literature were presented in something relatable, that might be enough to spark interest and enthusiasm to dive deeper into lifelong learning and banish ignorance for good.

Of course, the Everything the title connotes is the wide scope of topics Bryson covered, moving from one to another with ease, and with great cohesion between each to form a holistic theme. Starting the book with a congratulatory message that each of us has made the cut out of thousands or even millions of candidates, and ending it with how humanity may cease to exist, he completes an arch of life with a multitude of chaotic episodes in between.

“I don’t know how much of this is pandemic-related [but] I’m really quite enjoying not doing anything at all. For the first time in literally decades I’ve been reading for pleasure and I’m really enjoying it. Whatever time is left to me on this planet I’d like to spend it indulging myself, rather than going out and trying to cover new territory,” Bryson told Times Radio. Perhaps in his journey as a writer — discovering many subjects and found liking in profound understanding that it’s too good to leave it in his mind and share the knowledge through his acclaimed books — he missed enjoying the things done without his pen or keyboard.

Not that he’s too old to write. At just 68, I think he could easily compile a few more future best-sellers. But who am I to make this claim, and he has all that freedom to call it quits. Though I have yet to read the rest of his books, I only have repeat reads on A Short History of Nearly Everything, The Body: A Guide for Occupants, and Down Under, I can’t wait to explore the rest of his works.

I’ve always found interest in non-fiction stories. I stay away from sci-fi, superhero movies, and prefer to listen to dark history podcast episodes over fictional crime stories. So I am fascinated by Bryson’s take on both the massive cosmic scale of the universe and the astonishing, ineffable world of elementary particles whose minuteness is often expressed by the author through narrating a long series of zeros.

Parents are a child’s first teacher, and teachers in school further enrich this child’s knowledge. But it’s normal for an inquisitive child to ask a teacher how did scientists find out that the age of the universe was about 13 billion years, and the core of the Earth has a temperature quite similar to that of the Sun’s core. If a teacher can’t provide an answer that satisfies a curious mind, the child’s thirst for knowledge may wane. Or he can at least look for alternatives to answer his questions: parents.

If a parent whose attempts to steer a child’s interest into science lacks the know-how and diverts the topic into something more imaginable, such a shift in interest will overcome the anemic and mundane state of a typical science textbook or any medium of knowledge for that matter. Alas, textbooks pack rich knowledge in a one-dimensional container that’s archaic and indeed of a big-time reboot.

Many teachers can’t articulate modern-day parents can’t One day, knowledge may be presented in augmented reality and 3-D graphics that will stir the imagination and expedite comprehension. Until then, we’ll have to look for alternatives to get things done. One of which, interestingly, is Mr. Bryson and his approach to storytelling.

After listening to Body: A Guide for Occupants on Audible in his low-pitched slow-paced hybrid American-British accent, I come to realize that my favorite author has decided to call it a career and put his pen to rest. While it’s sad I don’t get to indulge in his works, ideally on my lonesome hikes or staring at the windowpane on a rainy day, there are still several of his books that I haven’t opened yet.

Thank you and farewell, Mr. Bryson. You deserve that time to spend with family, grandchildren, and all other things you sacrificed just to write those great books that both educate and entertain us. But, it’s not too late to change your mind. I am one of those readers who certainly hope so.

I have been writing for Asian Correspondent as a blogger for the past 18...
Read more

8 More Lessons I Learned During My First Year in Australia

Today marks my first year in Australia. The memory was vivid and even took...
Read more

Towards the end of the year, around Thanksgiving and Black Friday deals that send...
Read more
Personal