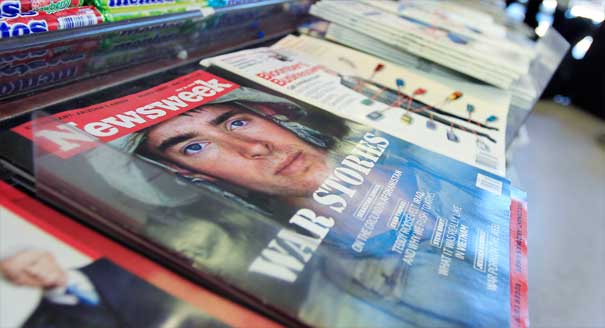 The moment I learned Newsweek is ending its printing run after nearly 80 years of service, it reminded me of how its sales people must have tried its best to resuscitate an increasingly extinct part of the media business.

I subscribed to Newsweek’s print edition for a year beginning the summer of 2010. At the time I needed a regular dose of news updates and commentary on top of my digital subscription of South China Morning Post where my interests fall mainly on local topics.

But shortly after I received my initial set of copies in our tiny, cranky mailbox at Wai Lee Building, I soon realized that the content was opinion-heavy with emphasis on US political issues, foreign policies, bickering ideologies and the like. None of such topics piqued my interest.

When I decided to make this subscription following an online promotion (which came in with a free silver wristwatch as a sweetener), I had imagined its content to be similar to Asiaweek and Moneysaver, two of my favorite copies to read at the UIC college library. Each page of those magazines seemed like serendipity in the making, whether it’s the current issue or a historical archive. These two tackle topics that are close to my heart, literally. The Asian currency crisis, most liveable cities, and how to live a week on a shoestring budget in the university.

As I’d return them into the shelf, another piece of information enriched my brain.

But Newsweek’s content was different. Obama’s policies, healthcare problems, and sober news about the economy felt so hardcore for my understanding. Unable to follow closely with its merging with The Daily Beast which emphasized more on analysis of the news, rather than just delivering it plain and simple, and simple changes like adopting a new (read: uglier) typeface, I slowly began to lose interest. Not that Fareed Zakaria’s political views are lame and uninteresting; content was just not a good fit for me and my interest. So once a new copy arrives, I simply skim through the content without ever spending much longer time reading than unwrapping a subscription copy from its plastic cover.

So as the subscription reached its terminal stage, I was surprised to receive extra issues. I called in the customer service worrying if I overlooked the terms and failed to switch off the auto-renew button.

“Sir, those issues are complementary and comes with your one-year subscription”, quipped the man on the other line.

After a couple of weeks, I continued to receive renewal forms packed in white envelopes especially labeled “urgent”, “act now” or other forms of calls to action statements. By that time, I already switched allegiance to National Geographic.

I did not realize that more than a year after receiving my last issue, Newsweek will soon follow the fate of Asiaweek and Moneysaver: shutting down print edition. At least, Newsweek offers online access while those two never lived to see the daylight.

As though ushering the age of digital media just took place, Newsweek’s predecessors made earlier transitions. Seattle Post Intelligencer switched to the online version in March 2009.  The revered New York Times made a bold move to pay per access, claiming success afterward, and proving my initial thoughts on websites ditching ad-supported free pages in favor of paywall wrong. Just last June, Dow Jones positioned SmartMoney as online-only magazine. And did I just mention earlier I have a digital subscription of SCMP?

So as Newsweek marks a countdown to its last printed issue by end of the year, I feel sad. But it doesn’t always mean the paper is conceding defeat — even though admittedly, it’s been losing money for years — only repackaging itself to cater to the taste of modern media consumers.

For the second year in a row, I managed to spend Good Friday on...
Read more

I was back in Davao for six weeks, the first time since the pandemic...
Read more

My Journey as a Choir Member