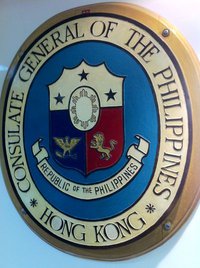 While I hear many Filipinos have bad experiences with Philippine embassies and consulates in various places, I can’t necessarily say the same thing with Hong Kong’s post.

Slow processing of requests, indifferent staff or simply unable or unwillingness to attend concerns of nationals are often the root cause of the animosity towards Philippine consulate or embassy staff.

A friend in Sydney thinks Philippine consulate staff over there act like gods and work at their own pace — slow and inefficient. A schoolmate in Singapore laments the poorly organized passport renewal process, which saw applicants form a long line outdoors, and left many of them give up meals just to keep their positions.

With over a million Filipinos, Saudi Arabia may have been among the most heavily-criticized posts. From failure to assist abused domestic helpers to hard-to-reach hotlines, staff and officials often receive such harsh words from frustrated Filipinos.

In some cases, fed-up citizens have taken their complaints to another level. When a Filipino domestic helper in Hong Kong tried to seek advice from a Labor Attache for employer abuse, she was met with the stern reply that prompted one of her friends to record the whole conversation. The incident prompted local Filipino groups to voice their displeasure at how officials treat overseas Filipinos, more popularly known as OFWs, the widely-acclaimed modern-day heroes. Although many might wish to label the government officials and diplomats as the same, some complaints also get acted upon. Erring officials get recalled from their posts.

Personally, I think it’s unfair to pin the inefficiency of the system towards the staff who are tasked to implement them. If the Overseas Employment Certificate — a document that proves the legitimacy of a Filipino working abroad, thereby granting him travel tax exemptions — is clearly a time-waster. But it still needs to be part of a vacationing worker’s experience, and going ballistic in front of the counter attendant over matters beyond his or her capacity doesn’t help at all.

Maybe we are just good at looking at mistakes, but often fail to offer ‘sensible’ suggestions. (The emphasis is aimed at those who offer ridiculous ideas.)

Over the years, I have occasionally visited the Philippine Consulate in Hong Kong to renew my passport, to apply for OEC or get documents notarized. In my recent visits, I observed that staff are more approachable and speak more politely. In short, they’re easier to deal with, despite their apparent hectic day at work dealing with people who may be carrying frustrations at work and regional personalities into the Consulate office.

Just today, my wife and I went to apply for e-passport, we found ourselves waiting for our turn at a small room with data capture machines. One of the staff was out for a while when Consul General Noel Servigon came in and asked us about our appointment schedule. Apparently, wanting to ensure our appointment should go as scheduled, he called on another duty officer to take over the vacant machine.

And while waiting for my wife’s turn to finish photo taking and with documents in hand outside of the room, one female officer proactively called my attention and advised me promptly on where should I go next. Sometimes we just need to appreciate these little gestures and not just when someone responds to our call.

Overall, I am impressed.

Surely, there are still people who will find the operations less than impressive or staff members less approachable — I might observe them personally in the future — but I see good progress going on. Whether consulate folks underwent customer services seminars or just acted out of good intentions to serve Filipinos in Hong Kong better, I see the improvement and keep up the good work.

We acknowledge the improvement and soon I hope I’ll hear similar feedback about Philippine consulates and embassies elsewhere.

The Joy Audiobooks and Podcasts Bring

The moment the Sony Walkman was introduced to the mass market, it changed the...
Read more