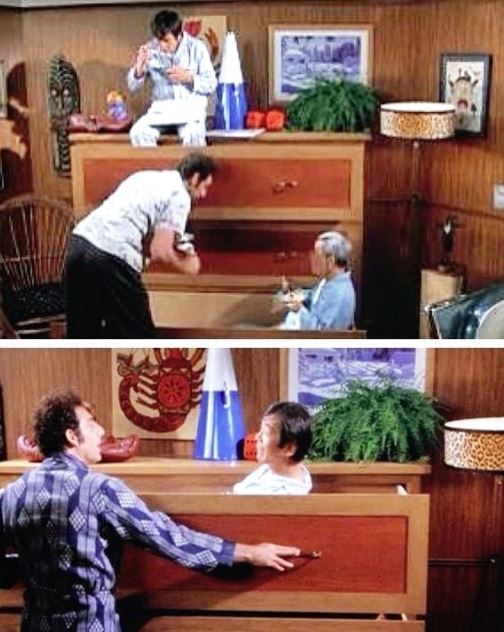 The Virus: A Seinfeld Special Episode

Preface: Coronavirus is a serious case that should be taken seriously than taken for granted. Let us wash our hands properly, follow regulations imposed such as social distancing and self-isolation, not just to protect ourselves but for other people around us who might be more vulnerable to catching the virus. Also, don’t panic.

Talking about panic, it’s not helping if we worry and cause other people to worry as well. Worrying is a feeling but in this time of coronavirus, it’s also manifested in how we act. Washing hands while singing your favorite song in its entirety is not a sign of panic. But going to the supermarket and fight your way to binge buy on toilet paper, wipes and cleaning agents is.

Talking about not worrying, I So while I was binge-watching on Seinfeld (surprise, surprise) over the weekend, I can somehow relate the episodes with the current coronavirus crisis. Elaine grabbing a pile of toilet paper from the bathroom reminds me of the chaos at a certain aisle in the supermarket, Jerry stealing marble rye from an elderly lady reminds me of the fight for toilet paper, and both Mr Dalrymple and Mr Lippman developing flu that led to disastrous results.

While there is no script that is dedicated entirely to the virus, we could stitch together a number of scenes that depict a Seinfeld representation of the current state of affairs that is upon us now. Remember, this is just a script meant as a joke out of the Seinfeld universe and in no way downplay the seriousness of the current Covid-19 issue we are facing worldwide.

Before the whole coronavirus issue got out of control, there were tell-tale signs that manifested within certain Seinfeld scenes.

Mr Lippman sneezing.
Pendant Publishing was about to be merged a large Japanese conglomerate. But as Japanese investors came by at the office, Mr Lippman refused to shake the hands of the visitors. Apparently he is trying to do some social distancing, even if such change in behavior — by not shaking hands with representatives of the Japanese investors — and cost him the deal.

Elaine’s flu.
While confronting Jerry and George for not including a woman in the sitcom they’re developing, Elaine has already developed the flu. She then confronts Gail Cunningham for talking about the pair of shoes she bought at Botticelli. Elaine unwittingly sneezed at the pasta primavera Gail is about to serve to NBC executive Russel Dalrymple at the restaurants she works for as a chef.

The rapid spread through socialization.
Seinfeld is a very social sitcom, where each of the four characters has his/her own story arc in an episode. Social distancing sounds like a taboo. No wonder the disease has kept spreading, helped greatly with a ghastly display of bad food and social habits.

George double-dipping
Attending the wake of her girlfriend Betsy’s aunt in Detroit, George grabs a chip and double dips it, to the chagrin of Timmy, Betsy’s brother. This ends in a physical confrontation, and leads to the breakup of the George-Betsy relationship. The dip may have been kept at the table and others made a dip, of course without doubling up on the chip.

Kramer’s bathroom food preparation
Kramer confesses he prefers shower than a bath and recalls how he was so disgusted with the latter experience (“I am sitting there in a tepid pool of my own filth.”) But he doesn’t just do shower there. Kramer also makes use of the facility to prepare salad he’ll later serve to Elaine, her boyfriend David Puddy, and colleague Peggy. As expected, the trio is horrified to know how the salad was prepared.

Poppie’s unhygienic lifestyle
For a restaurateur of his stature, Poppie has that nasty habit of not washing his hands after using the toilet. Especially that he kneads the dough and bake pizza, his disgusting behavior puts customers at risk of getting sick.

“Even if you’re not gonna soap up, at least pretend for my benefit,” Seinfeld would later quip.

Elaine gets trapped in the train
En route to a lesbian wedding, Elaine took the train with the three stooges, though each would head to a distinct destination. The train breaks down and the claustrophobic Elaine is stuck with people of various state of hygiene, sending her into a rage — at least in her imagination.

“Man hands” touches Jerry’s face
A big no-no tip from experts is to avoid touching your face. Regardless if by your hands or others. Over dinner with Jillian, Jerry fails to remove a smudge on his face. So his girlfriend does it for him.

Jerry ‘picks’ his nose
Not only did someone touch Jerry’s face, he does an equally disgusting act of ‘picking’ (depends on your perspective, hence the quote) was caught in the act by perfume model Tia, who then starts avoiding him because of that despicable behavior.

Aaron stands too close for comfort for everyone
Elaine’s boyfriend Aaron has the propensity to take her for granted and instead focuses on other people around — notably mom and pop Seinfeld — with his trademark approach. No wonder, he got branded as a close talker. If he were a virus carrier, he’ll likely infect anyone who talks to him.

As the invisible enemy infected a number of hosts, chaos ensues. People snatching away other people’s toilet paper, others get into the habit of panic buying, and toilet paper disappearance at toilets have gone to historic levels.

Elaine’s stall runs out of paper
So she asks for a square from the lady next door, even a puny little ply, and was promptly rejected. Later she makes her revenge.

Toilet Paper Chase
Jerry gets creative to try to help his best friend save face after the latter’s parents took back the bread they brought in after it wasn’t served on the Ross’s table. The often mild-mannered Seinfeld showed a rare penchant for violence, once the usual persuasion approach fails. While the actual scene was the marble rye mugging, it could work for toilet paper, given the scarcity of this merchandise in grocery shelves.

Kramer stocking up on grocery
Jerry: Hey. You put your groceries under the hood of my car?
Kramer: Aw, that’s right, we forgot about those.

Kramer may want his fruit supplies fresh, but he also has this herd mentality in him. Thus, he bought lots of grocery items and even forgets he stuck some of them in the hood of Jerry’s car.

The virus makes a dramatic entrance and causes massive paranoia as you can see in the despicable acts described above.

Kramer pretends to be a doctor Van Nostrand
Kramer is an indispensable friend who will go greater lengths to make things happen for his friends. If George is proud to pretend as an architect, Kramer makes a good impression as Dr Peter Van Nostrand to snoop into Elaine’s medical records or perform elaborate checks on Mr Kruger for molds.
In this episode, he could examine the behavior of bats or visit wet markets selling wildlife to get into the bottom of coronavirus.

Is it lupus, is it coronavirus?
When it comes to diseases and checkups, George is a pretty freaked out fellow. A seemingly harmless white discoloration on his face could trigger his fears he might cancer. He’ll take up whatever he finds as medication — from Chinese herbal medicine for baldness to Tor Eckman’s “holistic” medical approach. More on him below.

Bubble Boy Suggestion to Prevent spread
We are battling an invisible enemy, Kramer / Dr Van Nostrand may say about this virus. So why limit yourself to washing hands or wearing masks when you wrap yourself in a bubble as a fool-proof way to special distancing?

George gets tested negative — and wails
George probably thought that all negative is bad. He’ll soon find out that in medicine, a negative result is likely a good thing. So be sure to remind him when he undergoes a Covid-19 test.

Tor Eckman Offers Alternative Healing
Considering the medical establishment as a business and a patient is, in fact, a customer, Kramer introduces an old friend Tor Eckman who is into alternative medicine that is “holistic.”
“Holistic.. that sounds right,” George would comment. But his decision was mainly because it’s much cheaper than a routine surgery that did not end well with Kramer’s friend Bob Sacamano.

Morty is afraid to lose his wallet and forfeits his checkup
The virus affects mostly on weak and vulnerable elderly population so a check for makes a lot of sense. But just like Kramer, Morty Seinfeld has animosity towards hospitals or clinics.

Jerry Stocks Down
The financial impact of the virus is tremendous. This prompts Jerry to sell shares of his stocks in an effort to salvage some of his investments. George may have forgotten about it so he enjoys a rare moment when he got lucky.

George Downplays Cruise Ship Deaths
Luxury ships had a significant contribution to the spread of the virus. But according to George, whether there is an epidemic or not, deaths usually take place in cruise ships.

Tom Hanks Coronavirus – Elaine Pretends to be Deaf
Elaine pretends to be deaf but when the limo driver mentions Tom Hanks, she suddenly opens up to a conversation.

Newman postman receives a note to clean parcels.
Mailmen could be carriers of virus through the parcels they deliver. This doesn’t change Kramer’s mind and unsubscribes to mail.

“As long as I stop getting mail!”

No hand gel? No problem

If u r a pitcher on the Indians, take Costanza’s advice pic.twitter.com/GZcm3KSMum

Travel ban imposed
George gets a break after his flight to Paris is canceled so he doesn’t have to look after Joey and reunite him with his dad. Also, this development meant a halt to Jerry’s attempt to disprove that there are indeed villas available to rent in Tuscany, as opposed to The Maestro’s claim.

Frank and George’s computer business is selling like hotcakes
No more Frank tallying a familiar zero sale output by his son.

Wash your hands, but don’t finish until you sing the entire song

Indoor board games as friends self-isolate
Remember, quone is not a word.

Thanks to the unrelenting efforts by the characters of the show, the virus has been contained and life goes back to normal. In retrospect, George reflects on why people have to run to groceries and panic buy, of all things, toilet paper. He then imagines how it evolved during the course of history.

Love During Time of Coronavirus

We are in an unprecedented time of self-isolation during this period of COVID-19. Governments...
Read more

No Through Road: Exploring Sydney Neighborhoods

Walking around Sydney's idyllic neighborhoods is a pleasing experience. On a clear, Saturday morning,...
Read more

One of the most remarkable things I observed in Europe is the fact that...
Read more
People

Previous articleA Tale of Our Engineering Projects
Next articleFilm Review: The Parasite