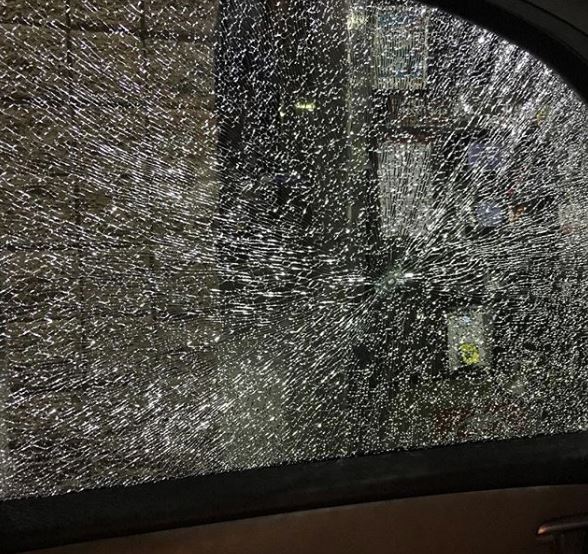 Appreciation for Life Amidst Near Death Experience

A piece of recent news about Filipino celebrity Kim Chiu surviving a shooting incident reminded us of a similar experience in 2018 and prompted us to look at life from a certain perspective.

Back in the summer of 2018, on a leg of our Phoenix-Seattle summer vacation, my wife and I just had dinner with Joanne Vilchez-Baysa and her family at Westgate Entertainment District in Glendale and headed back to our hotel. We just passed by the massive University of Phoenix Stadium in a relatively dark patch of N 91st Avenue near W Bethany Road when a loud bang rocked the left side of the car.

At the time, we were self-reflecting over what we had for dinner, while Joanne’s kids, aged 7 and 5, were busy playing with their tablets in the backseat. Joanne’s husband Jorge was behind the wheel, occasionally chiming in about the festive setting on our table. In a typical Arizona summer, nights bring a bit of relief from the punishing daytime sun. It was close to midnight and the kids started to feel restless, and understandably so.

We’ve been in Phoenix a few times, but this is the first summer trip for me and my wife. In the midst of the dog days of summer, the Arizona Diamondbacks returned to face the Colorado Rockies at home field after the All-Star break. In the All-Star game, D-backs infielder Ketel Marte was voted as a starter for the National League and went 1-for-2 with one strikeout in NL’s 3-4 loss to AL.

At the Chase Field, Home of the Diamonbacks. I still go with the Yankees team?! Mr vs Mrs?. #phoenix #teamcagape #phoenixarizona #travel #usa??

While we enjoyed our first Major League Baseball experience, with great seats not too far from the catcher’s viewpoint, and billboard appearances by my model, the boxscore did not favor the home team. The Rockies overcame a couple of three-run deficits to win the game, 11-10. Behind the reliable Nolan Arenado who homered twice, it was outfielder Raimel Tapia’s grand slam on the 6-run seventh frame against set up-man Archie Bradley that turned Colorado’s fortunes around, to the disappointment of the majority of 29,546 fans who showed up.

The following day, Sunday, most of the much larger crowd of 43,340 hoped for an Arizona turnaround. But Tom Murphy showed up and hit his first homer of the season and almost two years since his last one, lifting the Colorado Rockies to another squeaker, 6-5, and season-high seventh straight win. Worse, the win moved the Rockies past the Diamondbacks into second place in NL West.

I used to think that watching live games will favor my teams. I was in attendance, also with Joanne and Jorge, when the Phoenix Suns beat the Dallas Mavericks 109-97 on February 15, 2008, just as the Suns shipped Shawn Marion and Marcus Banks to Miami for Shaquille O’Neal. O’Neal could have played but was on street clothes on the bench that game. Steve Nash had 24 points and 13 assists for the Suns.

The dinner was indeed peppered with chats about that basketball game ten years ago, how much has changed since then, and how I came to become a fan of baseball. The kids are now more independent on the dining table, except for my wife’s usual serving of udon and other things she missed in school while on vacation. It was a gathering to remember, especially that schedule conflicts prevented us from doing so in our last winter visit. This time, we also managed to meet Kate Hufana, sister of Charm Barcelona, our friend in Hong Kong.

The trip back to our hotel was routine, except for that loud bang that rocked the passenger window of the front seat. With fatherly instincts, Jorge promptly sought to check how the kids were, after discovering that the bang actually did some damage but not enough to break the tempered glass window. At that instant, I thought it was a stray rock falling from a large truck and fell onto us. For a moment we were stunned as we soon found out about the crack and the strong possibility of a shooting attempt. Jorge called out Joanne to dial 911 as he settled the Honda Pilot into a nearby gas station.

To me, who was seated next to Olivia, the elder child, it was a relief that everyone in the car was safe. But to the wary parents, it wasn’t enough. Someone must be held responsible and face the law. Two police cars arrived a few minutes later as Jorge identified himself and Joanne as the caller. Investigators with flashlight scanned the vehicle for other possible traces of damage and attempt to draw a mental picture of how things happened, and who could have done it, based on the information we provided. The police suspected that it was one incident of a BB gun sniping from a location concealed in total darkness, aiming from a reasonable distance and randomly shooting at cars passing by.

We could have been sound asleep at the time, but the incident brought us way past midnight into reflection about life.

Like Kim Chiu, who figured in a similar incident (but involved in more bullets than ours), we could easily say “life is really precious,” and this was our second lease of life. Anything could happen at that moment and we’re blessed to have made it emotionally trembling but otherwise physically unscathed.

There are two takeaways I can share from that experience.

We hear it all the time. From advice to drug overdose patients to those contemplating suicide, life is precious. Others say “you only live once,” emphasizing that we should make the most of it. But I looked at the statement as one that smacks of desperation: you do what you want to do because you can’t do it after this one singular life you have. Instead, in my PHD yearbook, I wrote “YOLO is false. You live every single day of your life.”

Life is uncertain, and nobody can predict when or how we’ll die. Heart failure, road accident, choking on cotton fruit or deep in our sleep. The thought of death scares us because death is certain. I’m a Catholic who believes in the Kingdom of Heaven after death, but I am also curious about the journey from deathbed to pearly gates. That’s why I am so curious about near-death experience stories. Do we have the chance to uncover the mysteries of the universe and be given enough time to navigate through space and time and quench that thirst for knowledge (at least astronomy for me)?

Why, you do not even know what will happen tomorrow. What is your life? You are a mist that appears for a little while and then vanishes.
– James 4:14 (NIV)

If we live life to the fullest, we should not be afraid to die, though that doesn’t mean we SHOULD want to die. (This is not a reason why I hate to wear masks despite the coronavirus freaking people out.) We know it’s a matter of when and not if. So, let’s treat today as if today’s our last. Be thankful and contented. Reconcile with enemies if you have one. Spend more time with family.

The worst thing that could happen is in our obituary, we’ll only be remembered as a hardworking person who only delivered business targets and amassed wealth, but not known as a loving parent, child, friend, spouse or colleague.

When Jorge initially called out Joanne to dial 911, I can sense a tense situation he was in. He had five passengers in a car he was driving, and a reckless reaction could put everyone in danger. But he was calm and collected in the midst of that sudden jolt. Staying calm can help clear our minds and act rationally amid the chaos that surrounds us. I know it’s better said than done, and it requires mental training to get into this groove. Many people have blanked out, stunned and unable to act in such situations, but I honor Jorge for showing fortitude and in control of his emotions.

As I write this, there are more than 70 confirmed cases of Covid 19 in Australia. Such a rising number pushed some people to take it to the extreme, rush to the supermarket and grab whatever mask, toilet paper, and alcohol money can buy. On one end, panic buying could be a product of rational thinking, planning ahead that in case Australia descends into a lockdown, they already have ample supply of daily necessities. But on the other end, such an act is also a tangible example of greed and selfishness and creates an environment of unnecessary pandemonium, and worse deprives others of what they deserve.

Staying calm doesn’t mean taking no action. But without being complacent, we take things in a manner civilized beings do. Even if the pledge by Woolworths or Watsons that there are enough supplies available for all is true or not.

At 11:40pm we were driving along N 91st Street near W Bethany Home Road in Glendale, Az as we head to the hotel from dinner at Westgate. . Suddenly we heard a gunshot smashing the driver’s window. After confirming nobody was hurt — only shaken especially we had two kids aged 5 and 7 inside the car — we called 911 and parked at a nearby gas station. Three minutes later, three police cars arrived and police officers asked us questions and checked the damage. . Having known about shootings at schools and highways, America’s gun problem remains a concern. . Police suspect that it was a BB gun aimed by a sniper at a reasonable distance, randomly shooting passers by. . Travel is mostly enjoyable and full of excitement, but sometimes things like this can happen. #guns #arizona #travel #unitedstates

Why Research Beats Instincts When Traveling

Milan's Centrale railway station is a bit different from the ones we previously experienced...
Read more
People